The Summit will be supporting two charities this year. 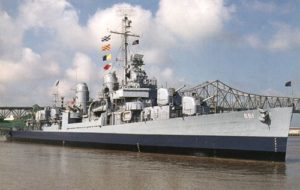 The first is the USS KIDD berthed in Baton Rouge. The USS KIDD, a Fletcher-class destroyer, was the first ship of the United States Navy to be named after Rear Admiral Isaac C. Kidd, who died on the bridge of his flagship USS Arizona during the 1941 Japanese attack on Pearl Harbor. The USS KIDD is has been restored to its 1945 configuration and is open to the public. The USS CORSAIR has spent many an away mission enjoying tours of the ship and helping out with cleaning and repairs.

The second charity is the Greater Baton Rouge Food Bank. Rated four-star on Charity Navigator, it serves 11 parishes and 115 Agencies. Their administrative costs are just under 4% so the majority of funds raised will go towards helping the community. During the 2016 Flood, their storage building and offices were devastated, and a significant portion of their food ruined